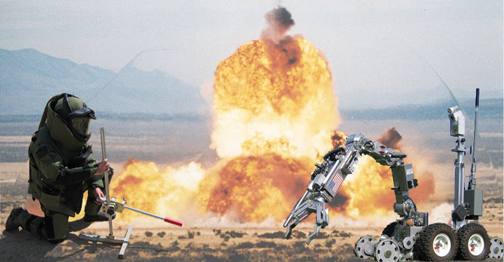 The Kenosha City & County Hazardous Device Squad was formed in 1993. Since its first conception it was structured as a multi-force unit which calls upon every public safety agency in the community for support. The unit has a mission which is simple and concise, “To provide front line support to any law enforcement agency or fire department in the event they encounter an explosive device or suspected explosive device.”

Cost of equipment and training was a struggle at the start. The unit made, borrowed or received equipment from sources unheard of before in the law enforcement community. Since we serve the entire community, this made the going at first a little rough. After several calls, the unit showed its value to the Community, and the agencies involved also became more supportive.

The unit's mission does not stop with just responding to explosive calls. The unit also supports all special operations, investigations and gives public speaking seminars on bomb awareness and safety. The unit has served as an educational cornerstone for bomb disposal units. The unit feels that public education is the key to public safety and reducing injuries from misuse or misunderstanding of explosives. The HDS Unit does not charge for any speaking or educational engagements.

The education of the unit members themselves comes from all over. The United States Army EOD, the FBI, ATF and United States Postal Inspectors as well as local bomb squads in the midwest have all helped in providing an effective training curriculum. The unit boasts that it has had no operational injuries to unit members or the public since it was first formed.

In February 1998 the unit underwent a dramatic change. The unit was transferred over to the control of the Kenosha Sheriff's Department. The Kenosha Sheriff's Department is now the lead agency and controls the unit. Along with this transfer of power and unit equipment came a change in leadership. The Sheriff now provides all support to the unit and is responsible for its operational readiness and training. This transfer was beneficial to the unit and has opened up many opportunities. 1998 was also the year in which the unit was certified as a full explosive disposal unit. This was accomplished several members attending the FBI Hazardous Devices School in Huntsville, Alabama. In the future all HDS members will be attending this school.

Some accomplishments that the unit boasts are that they started with an idea and developed a million dollar unit at virtually NO cost to the community. The unit has supported operations in Kenosha and Racine counties and is not limited to any geographical region when the call for help arises. The unit also has an effective criminal conviction record involving people making and possessing explosives and explosive devices. The unit has even consulted on a bill before the Wisconsin Senate which would ban and create a law for any explosive or look alike explosive used in a criminal act. The unit also provides on-going training open to any law enforcement agency or fire department who wishes to attend.

This unit stands for the future of public service and the multi-agency approach to problem solving. This approach is the future and we were the first to make it work. The unit's motto is “No task is too small and no mission is too large. We're always ready”.