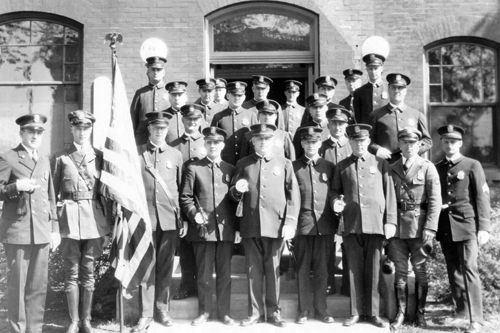 1841 - City was known as the Village of Southport. The population was 642. The streets and highways were lanes of mud in wet weather. Records show the first "Marshall" being Waters Townslee.

1850 - Southport changed to Kenosha, with one Constable. City of Kenosha was incorporated.

1880 - Population 5,039 with two police officers, one days and one nights. Their duty was to fill the four kerosene street lamps in Kenosha.

1890 - Population 6,532, five officers on the department. Jobs were strictly political. Civil Service in the year 1907. Communications, "Roundsmen", traveled on bikes delivering messages from headquarters to the officers walking their beat. The police salary was raised to $55 a month. The new big thing, was the city decided the police should have uniforms, but they would have to pay for them themselves. The city would buy the other equipment and it would remain the property of the city. The council also voted to give them $20 a piece to buy an overcoat.

1903 - The Police and Fire Commission was created

1910 - Population 21,371, thirteen officers on the department. Station house located above the Fire Department downtown. Two horse patrol wagons. Police Chief had his own horse and buggy. Switchboard at station and police call boxes were installed.

1913 - Motor driven patrol wagon was put into service. October 12th, the police had their first ambulance call. A man was hit by a motorcycle. They were able to exceed 45 mph.

1965 - 115 officers and 15 civilian workers. Matching the increase in numbers of officers, law enforcement in Kenosha has advanced quite rapidly in the Sciences of the Law Enforcement Field.

1986 - Joined with the community to start Kenosha Area Crime Stoppers

2008 - Launched Kenosha's Most Wanted on the KPD website, population 96,000, canine unit consisting of 2 dogs started back up with funding from the community